The natural sweetener, alternative to saccharine and artificial sweeteners. Its high sweetening power and its cero calories  make  it a suitable complement for foods, in diabetic problems and in weight loss diets.

According to a report from the international diabetes institute, published in Helsinki,

diabetes affects about 135 million people all over the world and it will affect more than 300 million in 2025. Diabetes is the cause of death for 3 millions persons per year.

The institute points out that treatment with medicine has not changed this problem much since the discovery of insulin in 1621. They suggest modifying the way of life, doing more physical exercise and eating a healthy diet.

The sweetening property of stevia is ideal to satisfy the needs of sweetening food and to control the daily sugar intake for those suffering problems related to metabolic disorders like diabetes and for problems of sugar consumption (either for intolerance or in high-weight problems).

The consumption of stevia could reduce anxiety for eating and the desire for sweets, chocolates and fats and therefore it lowers the daily calories intake. Stevia tea is recommended in China to lose weight because of its digestive properties, low calories content and sweet taste.

Several countries have introduced diverse plans to reduce the consumption of calories among its citizens, specially from junk food. In this context, stevia is a natural alternative for reducing the daily calorie consumption.

Stevia has been known for centuries as a sweet plant by the Guaraní tribes of Paraguay and Brazil. They used Stevia, called ka?a he?ê ("sweet herb"), for its several benefits, including its use as a sweetener and for medical purposes.

In 1931 the French chemists Bridel and Lavieille extracted from the leaves of this plant a white and crystalline element which they named “stevioside”, having 300 times more sweetening power than normal cane sugar. In 1952, a group of American scientists confirmed that this element (stevioside) is the most sweetening element ever known.

Stevia is a completely safe plant without any side-effects. It has been used as food for centuries in Amazonian countries and in extracts to sweeten food in Japan for more than 25 years.

Nowadays, stevia is used almost everywhere in the world to produce foods, drinks and desserts low in calories and adapted for diabetics.

Stevioside is a mixture of 8 glycosides diterpeniques, being the most stevioside and rebaudioside A the most relevant with 50% and 30% respectively. The other glycosides (rebaudioside B, dulcoside A, stevioviosides, stevion and isoesteviol) are present in quantities not detectable. 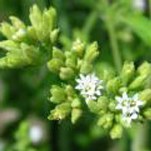 Stevia plants grow normally between 40 to 60 cm, it flourishes in august and September. Stevia plants are cultivated nowadays in Peru, Argentine, Brazil, Uruguay, Paraguay and in some other countries. Its flowers are white; its root grows near the surface. Stevia leaves have between 30 to 45 times sacharose’s sweetening power.

Stevia leaves are dried to be pulverized, taking off the nerves of the leaves to eliminate its bitterness. It can be then used as a sweetening powder or in liquid form.

Stevia leaves have a concentration of steviosides and rebaudiosides of 6% to 10% and occasionally up to 14%.

Several researches have found that stevia has: